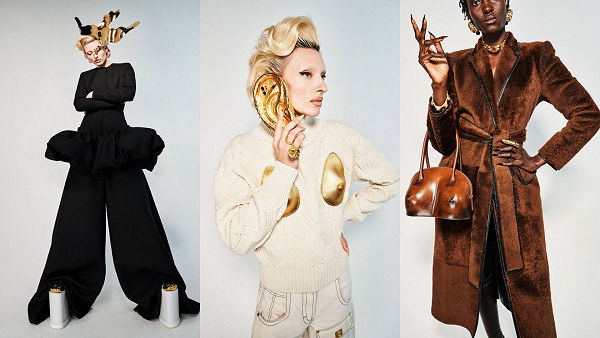 Schiaparelli is Surrealism writ joyful. Bijoux that are as much armor as they are embellishment. A disciplined palette. An irreverent take on silhouettes.
All of us who love fashion understand that there’s an uneasy (if necessary) marriage between design and commerce. Too often, commerce has to win. This is why Daniel Roseberry loves working for a couture house, where creativity still defines the mission and is never treated as an afterthought.

What is Schiaparelli? It’s a dedication to the unexpected, the risky, and the exuberant. You can see this philosophy in pieces like the oversized men’s parka, rendered in denim but with gold bijoux snaps; or the Milano knit trench coat trimmed in leather; or the navy leather cowboy-cut pant. You can see it as well in the jewelry: oversized necklaces, earrings, and rings that combine a Dadaist absurdity with swaggering proportions, so that
a row of molar-inspired rings (each crown of which is set with a glittering crystal) are worn on every finger, like a knuckle ring. 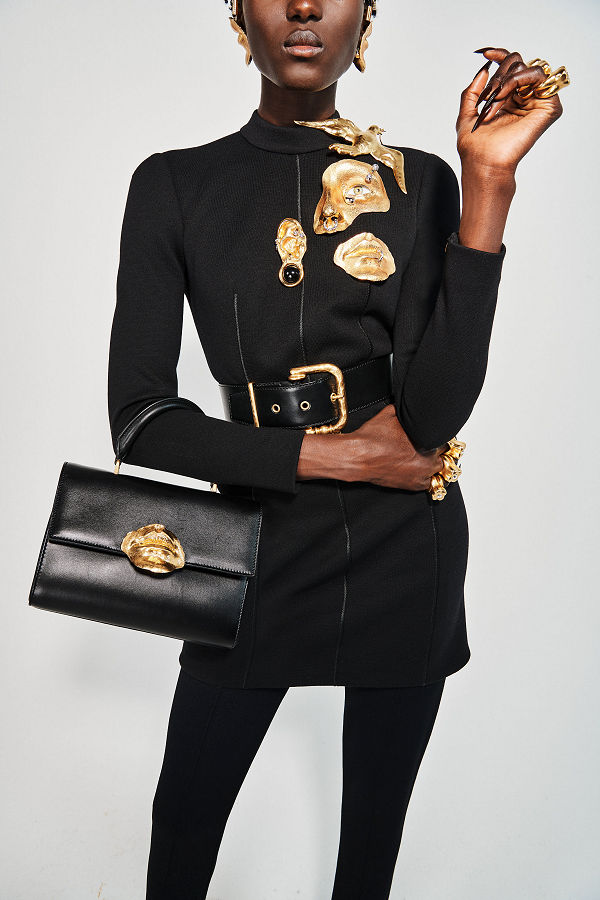 Yet the insistent, even unapologetic boldness of the decorative elements is juxtaposed with a sober elegance. The collection, rendered almost entirely in black, bone-white, and navy, is meant to be a canvas, a series of uniforms that the wearer can embellish with as much (or as little) as she wants. In that way, these pieces feel very personal to the designer —and the woman who wears them. They allow for freedom of expression, whether that’s a shout or a whisper. 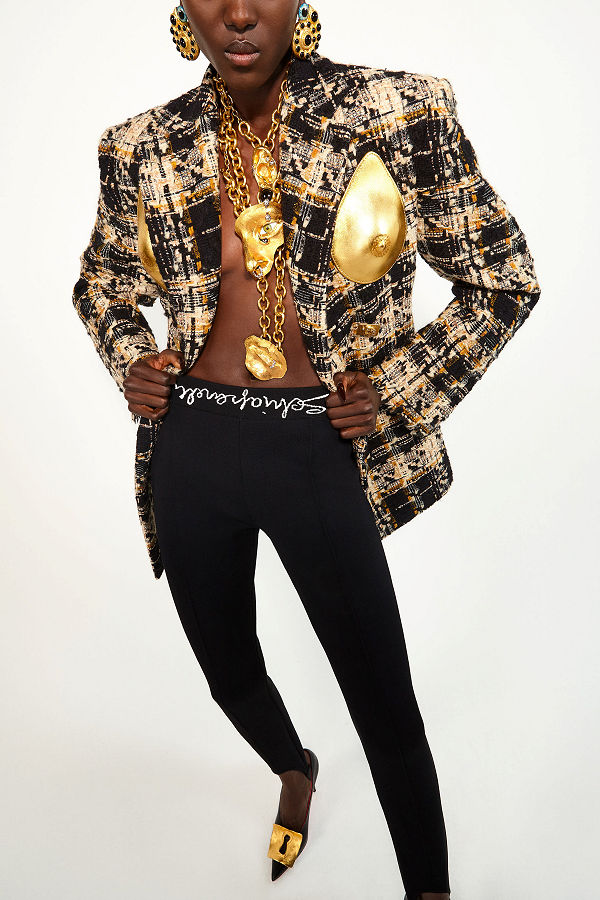 You can find that same improbably harmonious relationship, between the understated and the extravagant, in our new Elsa bag, here introduced in two new iterations: one embellished with a cast-metal mouth; another decorated with charms in the shapes of all the codes of the house (a tooth, an ear, a padlock, etc.)—jewelry not just for your skin, but for your purse as well. 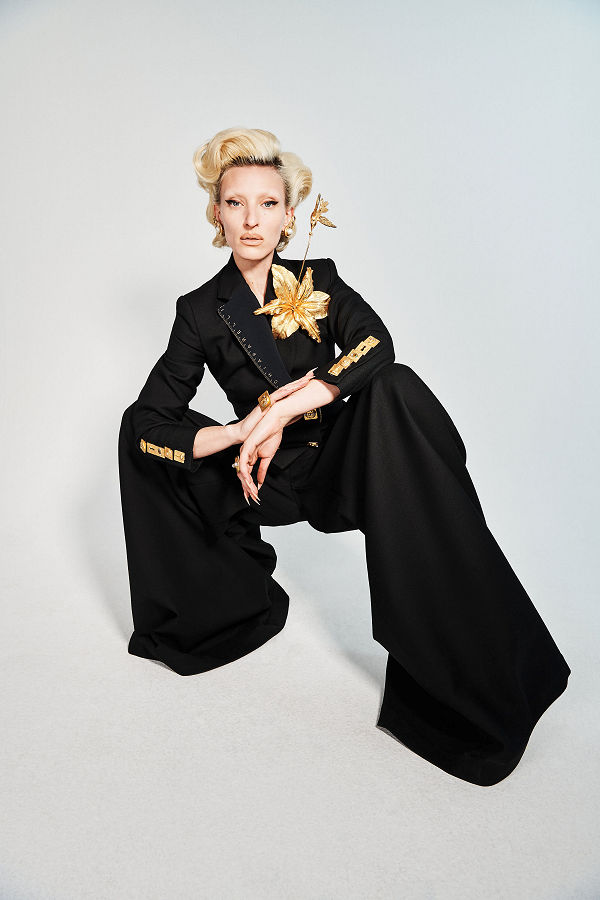 That fascination with body parts extends to our pieces featuring breast or nipple embellishments. 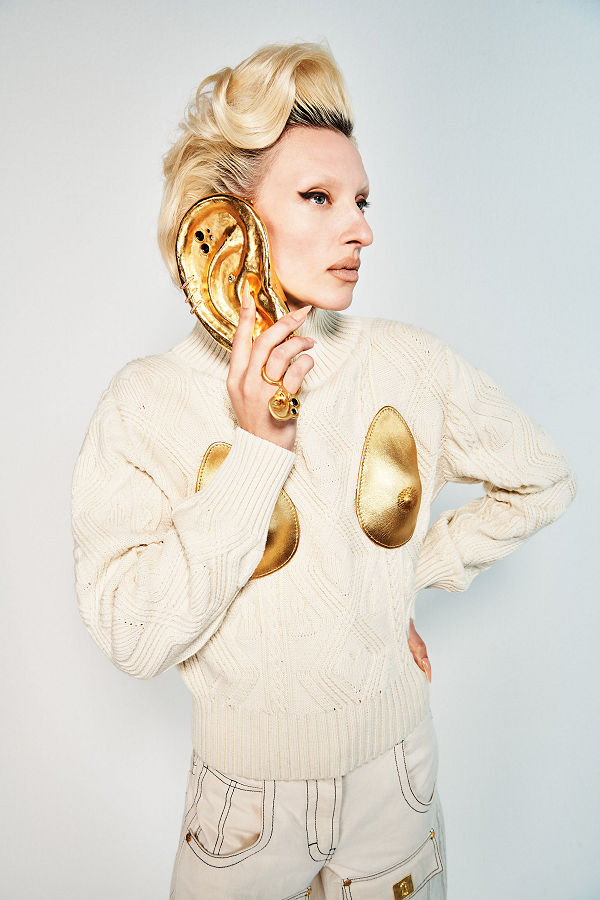 Sometimes, as in the pair of gold quilted leather breasts on a cream-colored hand-knit wool sweater, they’re pliable and soft (in this case, they were inspired by a pair of Man Ray eyewear from the 30s). 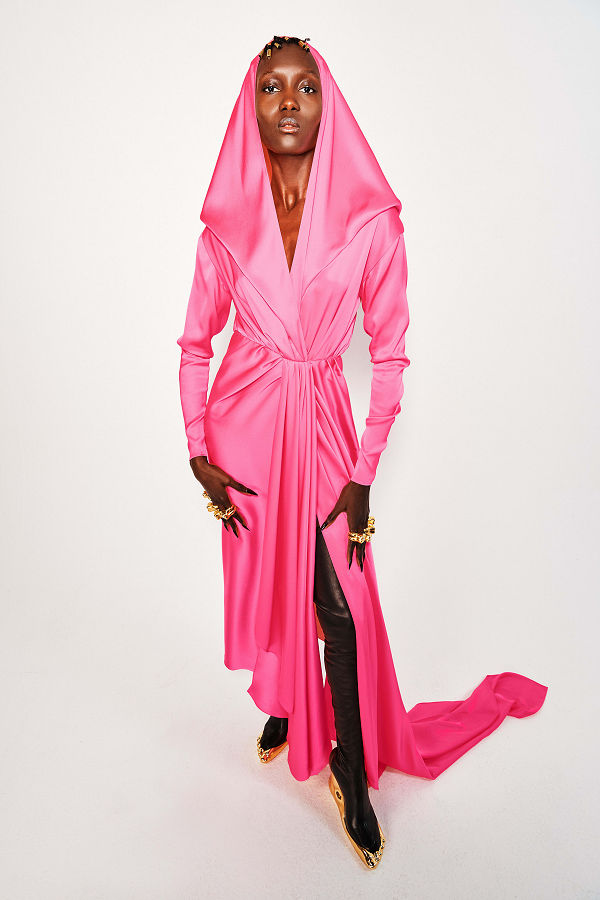 Other times, as in the molded leather bralettes, they’re harder, a kind of protection: serious with a sense of self-awareness. In both cases, they pay tribute to the body itself—its beautiful sculptural quality, its wondrous shapes. Elsa Schiaparelli believed that anatomy was not just a point of inspiration, but a playground. I believe that as well. That combination, of wit and wonder, is what defined her work—I hope it defines mine as well – said f Daniel Roseberry. 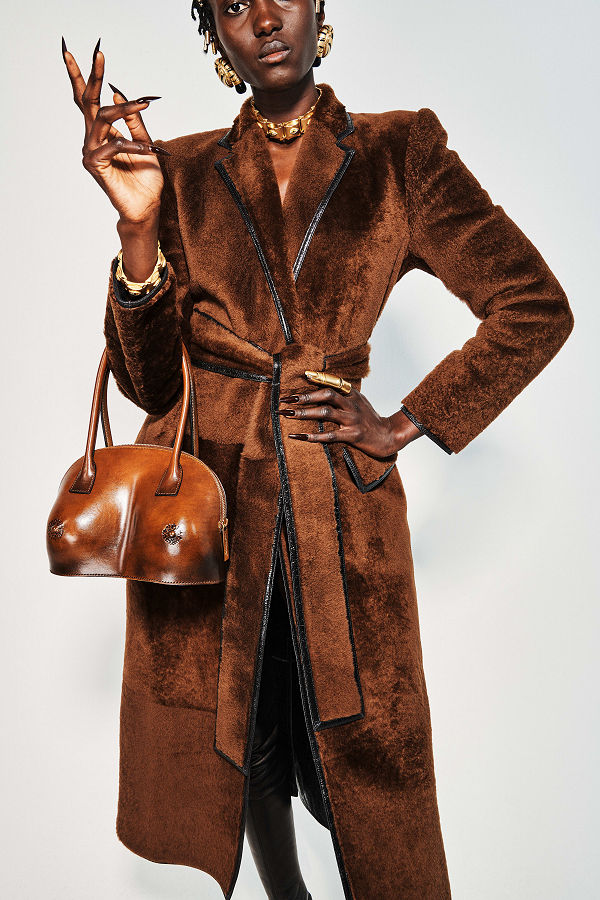 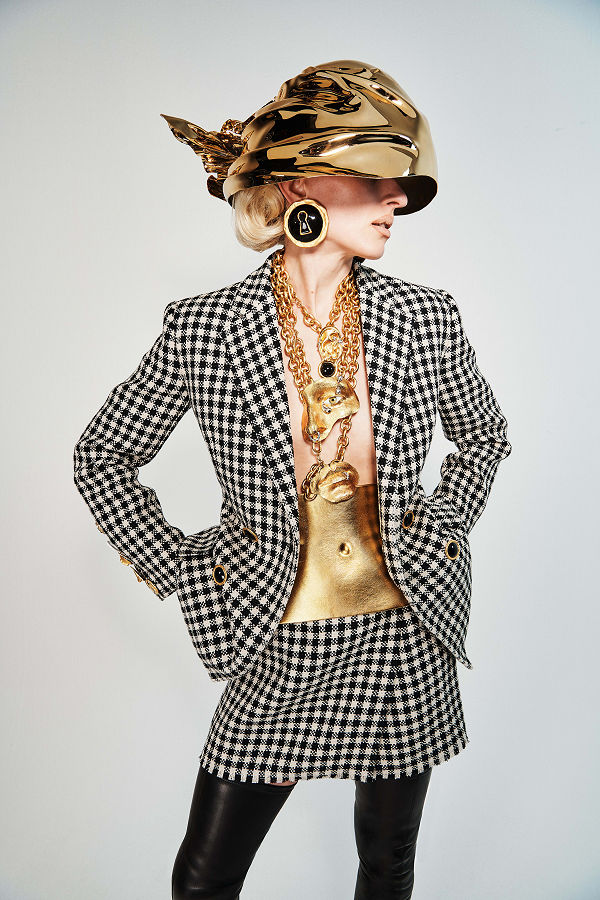 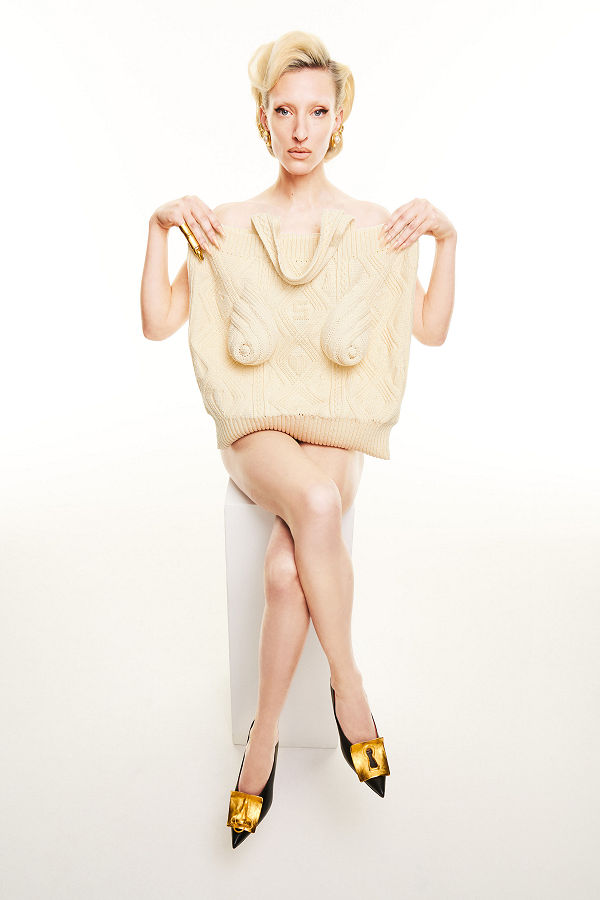 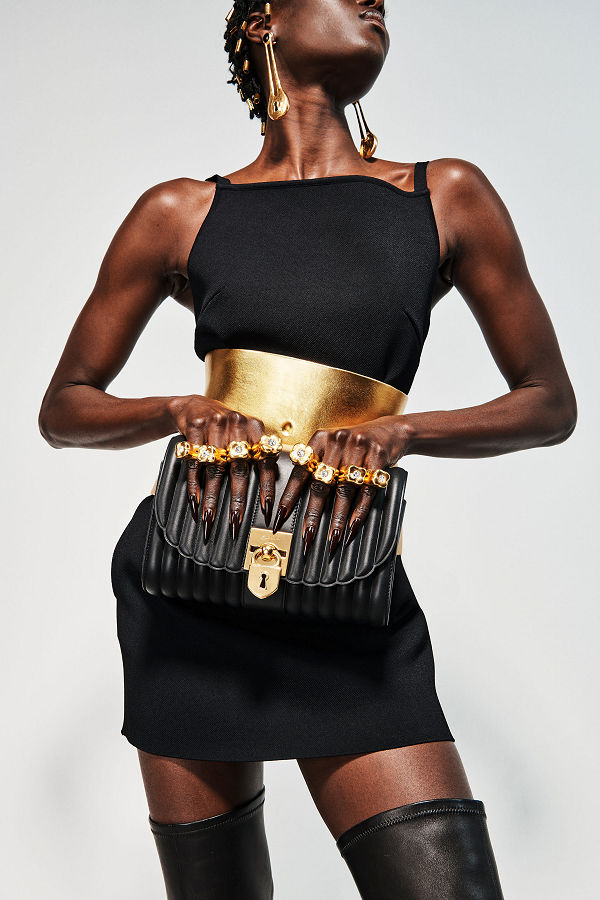 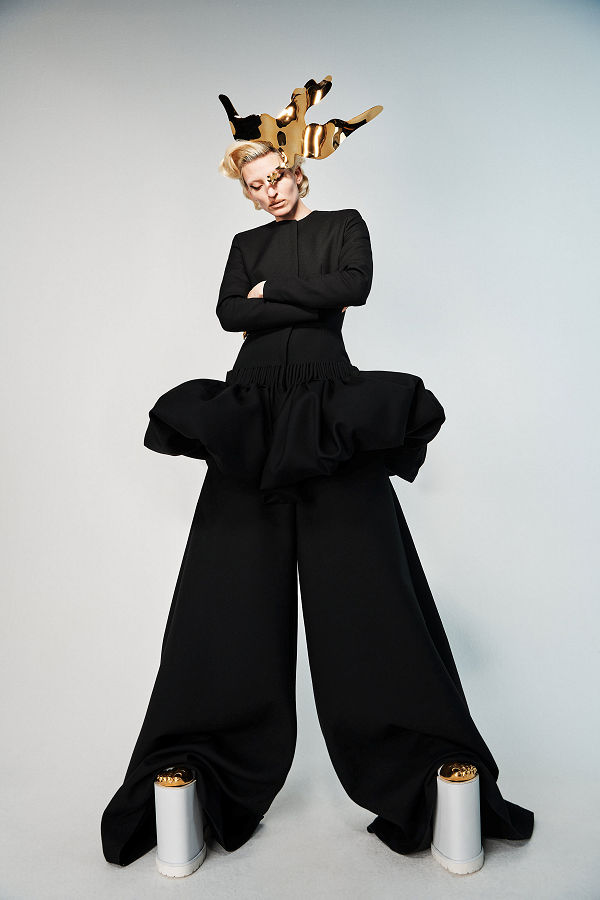 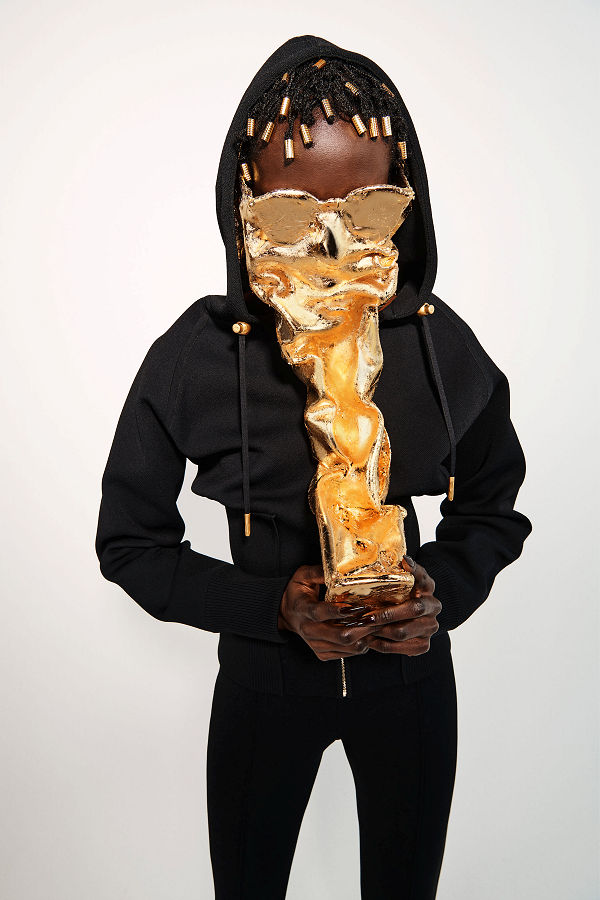 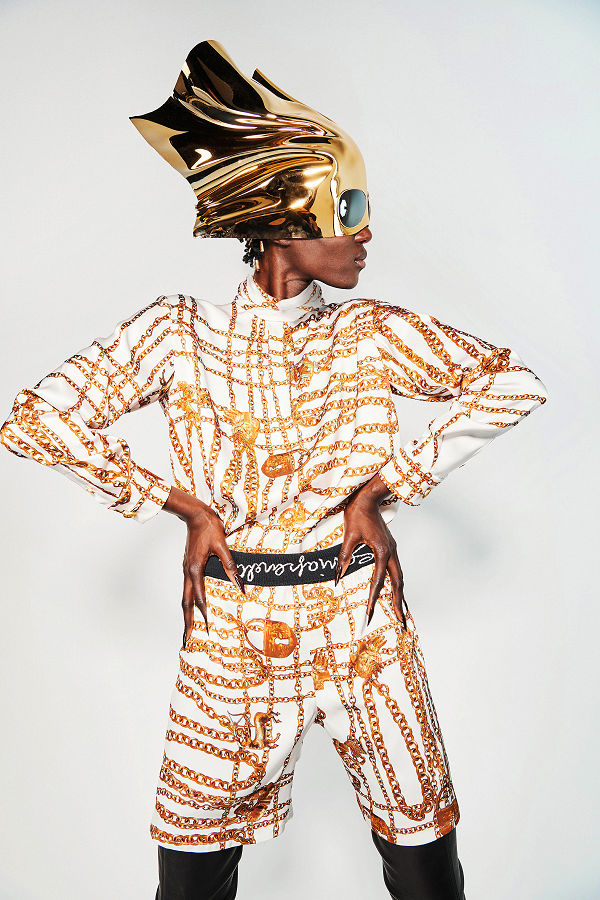 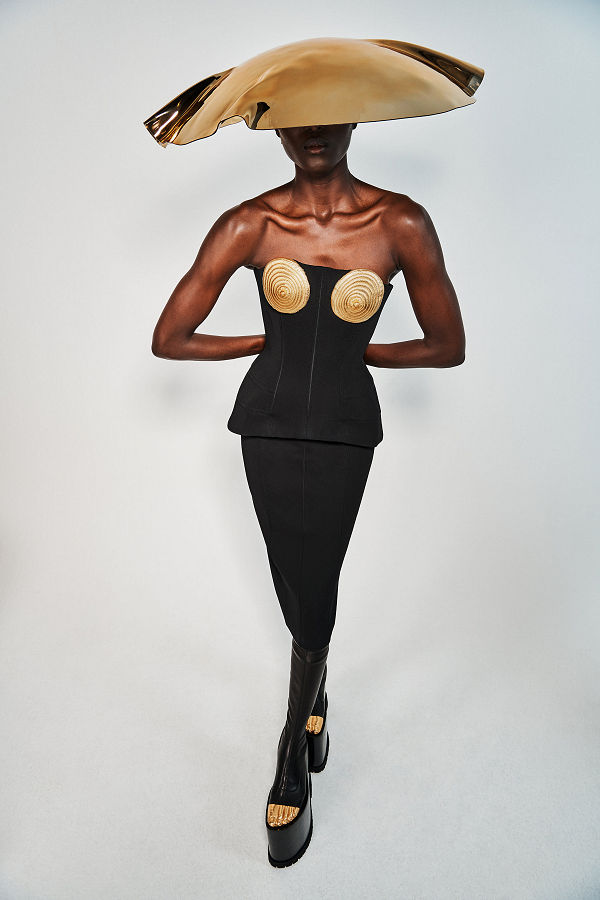 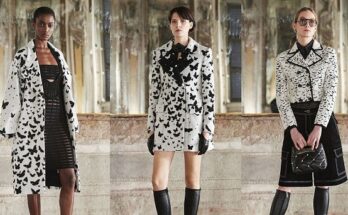 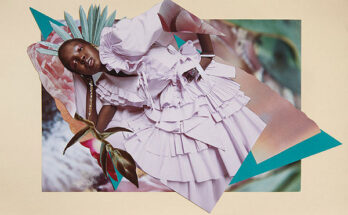